Various dreams and visions within the past month.

Today is Wednesday March 8th, 2017 I know it's been a while since I logged any dreams or visions but I haven't felt released from the Lord. I am sharing what I do feel released to share.

DREAM
I was helping someone rearrange a mansion. I couldn't see the man's face, but without complaint I did as I was instructed. He asked, "Do you like it?" I said, "Yes!" He said, "Good, because I'm giving you the house!" I was so excited. I woke up.

VISION:
LAST NIGHT 3/7/2017
Dream I stepped on the last step of stairs and they were either 4 angels or heavenly beings (looked in their 20's, possibly my kids. The 3 angels who passed in 2002 and the baby I miscarried in 1987)  dressed in pure white were clapping and smiling as I stepped up into the room from the last step. Everything was white and looked like a soft white glow everywhere. I was in white as well. It was like a celebration, like I finished a race. They were clapping and smiling as I came out of the vision.

I have fought a good fight, I have finished my course, I have kept the faith:
~2 Timothy 4:7


I do not choose hate, blame or discourse.... I choose Love!


DREAM LAST NIGHT:
Reoccurring dream of Alien attack or a false flag alien attack.Seen light ray pulses and someone pulled me out of the way and pulled me in some building. I looked outside and the top of the Gov. mansion was hit and split. Dee was in there, dressed in a Gray sweat shirt and was miserable. I was nice to her and she wasn't. People were hiding under blankets.

*After waking from this reoccurring Dream around 4:30 am, I heard, "I am giving you the house. You can have the house! Plus much more was said.

DREAM: A FEW NIGHTS AGO
Heard an om chant, "Put it on, shock the world!"

*I don't know what those dates mean, but I knew they were important when given to me.

VISION:
This past week I had vision of standing on a balcony, looking out the window and seeing the lake. I knew what place it was. It was the same type of vision I had just before Hurricane Katrina hit. I seen it and then it zoomed in.


DREAM: The day after the spillway broke.
As Many know the Oroville Spillway broke on Sunday February 12, 2017. On Monday February 13th I Had a dream the Oroville Dam was deliberately sabotaged. An Interview a week later someone admitted that it was. The image below what I seen in my dream, metal and drilling downwards.

This picture below shows the affected area. 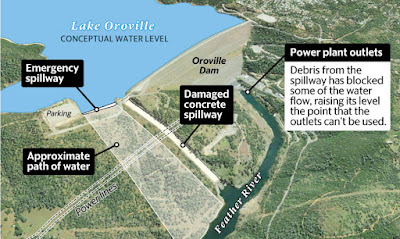 You can see the one of the many articles that are on the net
and watch the interviews by clicking the image below.

NOTE: The articles are on Before It's News but the ads over there are a bit overwhelming. So, keep in mind you will need an Ad Blocker. We use Ad Block Plus, it's safe, free and there are no ads! You can download by clicking the image below.

I heard "I SET IT UP" and Robbi and I knows exactly what that means. Good news coming soon!!!
Posted by Shirl Spencer at 9:07 AM

Welcome to my Dream Blog


Keep in mind these dreams are NOT in order. So feel free and browse the archives. Keep in mind also, that I have a long way to go because I have many dreams that I still have to log... But I'm getting there! :) Comments are turned off because I am not posting these for your approval, I am sharing because I felt led to, that it may speak to you in some way.

All Donations are greatly appreciated